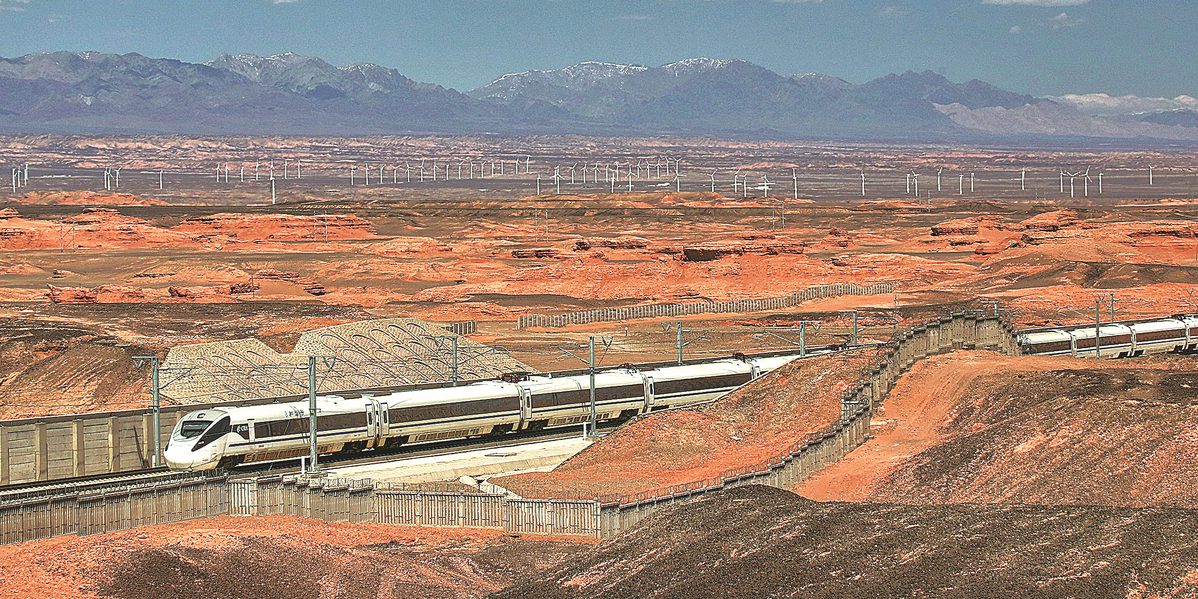 URUMQI－Railway maintenance worker Yu Guorong was once afraid of the wind.

For more than 30 years, he has battled winds in the Gobi Desert in Northwest China’s Xinjiang Uygur autonomous region to ensure the safety of railway lines.

Nowadays, Yu gets along better with his invisible enemy thanks to technology and windbreaks adopted for a high-speed railway that links the regional capital, Urumqi, with Lanzhou, capital of Gansu province.

The line runs for 1,776 kilometers, and about 462 km of the track in Xinjiang runs through windy areas. Some sections see winds of more than 72 km an hour for an average of 200 days a year, with the maximum wind speed exceeding 115 km/h.

In the 1990s, when there were no high-speed railways, moving sand often buried the rails, forcing the suspension of train services.

Yu and his co-workers often had to remove sand from the rails using shovels in strong winds.

“To avoid being blown away, we had to tie ourselves with rope while working, with one end of the rope fastened to a concrete pole,” Yu said.

When the Lanzhou-Urumqi High-speed Railway commenced operations in 2014, a series of windbreaks were put into use, greatly improving the safety and smoothness of train operations.

At a station in Hami, dispatcher Wang Renjie monitors wind speeds at different stations on a computer.

“The monitoring system automatically sounds an alarm if the wind speed exceeds 72 km/h, and the dispatcher will warn related departments to activate an emergency plan,” Wang said.

Rain, earthquakes and snow can also be monitored by the natural disaster monitoring system.

Concrete walls along more than 340 km of track in Xinjiang serve as wind barriers.

To prevent trains from being overturned by crosswinds, aboveground tunnels have also been built.

“Like armor, the tunnels shield the rails and the trains from crosswinds so that trains running at speeds of up to 250 km/h can operate smoothly,” Yu said.

In a windy area, more than 120 railway bridges are equipped with barriers made of sheets of steel that have small holes in them.

“The small holes are designed to prevent the steel sheets from being blown away,” Yu said.

Railway construction workers battling wind and sand near the Taklimakan Desert in Xinjiang have opted for a different approach and planted trees.

“Sand control comes before railway construction,” said Wang Jinzhong, who manages the company in charge of the construction of the Hotan-Ruoqiang Railway.

As a key national railway project extending 825 km, the railway will link Hotan with Ruoqiang county in the Bayingolin Mongol autonomous prefecture, running through the southern edge of the Taklimakan Desert.

The line is expected to open next June.