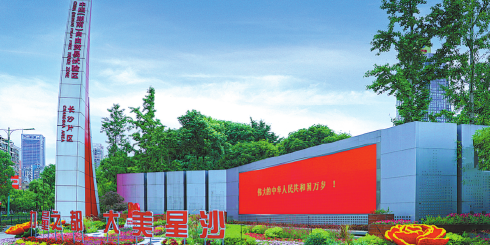 The development of an open economy is the main aim behind Changsha’s creation of an opening-up base. During the 13th Five-Year Plan (2016-20), Changsha faced a complex domestic and foreign environment and increased awareness of opening-up with a series of measures such as the “30 Industrial Regulations” and “16 Foreign Investment Regulations”. Based on its geographical advantages, Changsha has made breakthroughs in seizing strategic opportunities, with the launch of key projects such as the Changsha area of the China (Hunan) Pilot Free Trade Zone, the China-Africa Economic and Trade Expo, the Huanghua Comprehensive Bonded Zone, the digital renminbi reform pilot program, and the China-Africa cross-border renminbi center. Changsha has become an open frontier and reached a new high point in the development of the country’s open economy.

Changsha in Hunan province is striving to become a global multimodal transport logistics hub, an open center for international trade and a broader platform for companies’ “bringing in and going out”, local officials said.

On Aug 26, the first Hunan free trade special train of the China-Europe Express departed from the International Railway Port of Kaifu district, Changsha, and exited through Manzhouli Port to arrive in Minsk in 17 days.

“Delivering goods to customers on time is very important for companies,” a representative from Zoomlion said. “The opening of the free trade train has not only solved the problem of difficult shipments during the epidemic, but also achieved direct delivery and improved timeliness in transportation. Now our cargo turnover rate has also been greatly improved.”

There are more than 10 chemical operation routes, with nine to 12 lines running steadily every week.

As of August 22, the total number of Changsha China-Europe Express trains that opened this year is 579. They serve local economic, trade and industrial development, and effectively ensure the smooth flow of foreign trade channels and international supply chains.

“The Changsha-Minsk line will give priority to ensuring the positions of enterprises in the Hunan Free Trade Zone every week. At the end of the month, we will also explore the opening of the test business of the express delivery of trains,” said Yang Li, director of the logistics port office of Changsha.

As a test area for reform and opening-up, the construction of a free trade zone in Changsha has made significant achievements.

The Changsha area of the Hunan Pilot Free Trade Zone was established in September last year, and has just celebrated its first anniversary.

The free trade zone has become a new engine for Changsha’s opening to the outside world.

It is also the area with the largest volume and the most tasks in the Hunan Free Trade Zone. As an important opening-up platform, the Changsha area of the Hunan Free Trade Zone focuses on the development of the Belt and Road Initiative, the airport economy, and industries such as high-end equipment manufacturing, new generation information technology, biomedicine, e-commerce and agricultural technology.

On Aug 26, a “one-stop” service center for foreign-invested enterprises in the Changsha area of the Hunan Pilot Free Trade Zone was opened.

The center will provide foreign investors with services such as investment consultation, establishment guidelines, coordination services, information reporting guidance and complaint handling to coordinate and solve important concerns about foreign investment in Changsha, and improve the area’s sufficiency..

The Changsha area of the Hunan Free Trade Zone also has its own goals: It aims that after three to five years of development, it will become a first-class and internationally competitive environment for business.

On Sept 26, the second China-Africa Economic and Trade Expo centering on the China-Africa cooperation will open in Changsha as one of the important landing mechanisms of the Beijing Summit of the Forum on China-Africa Cooperation.

The event serves as Changsha’s first national, international, and normalized economic and trade platform. The Gaoqiao Market is an important block in the Changsha area of the Hunan Free Trade Zone. It has built a China-Africa economic and trade cooperation and innovation demonstration park.