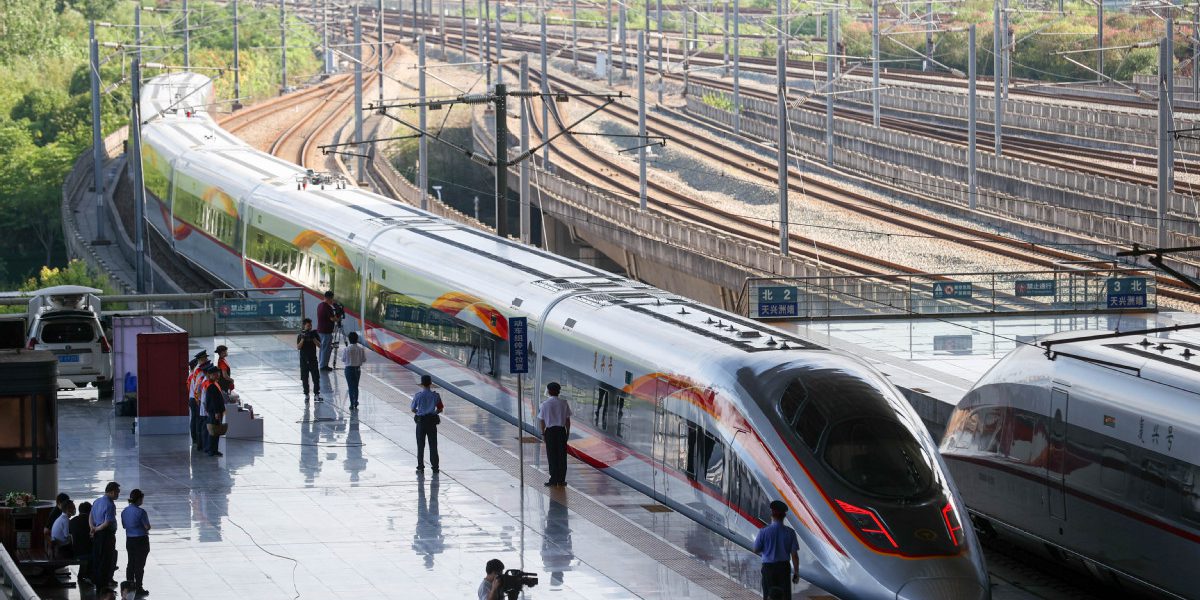 The speed of a major high-speed rail line in China has increased from Monday, cutting travel time between Beijing and a number of major cities in the south.

Bullet trains can now operate at a maximum speed of 350 kilometers per hour along the line linking Beijing and Wuhan, Hubei province, up from the previous maximum speed of 310 km/h, the national railway operator China State Railway Group said on Monday.

The line between Beijing and Wuhan is one section of the route linking Beijing and Guangzhou, Guangdong province, one of the main high-speed railway corridors between northern and southern China.

The section is linked to 12 other high-speed lines, and increased speeds are expected to benefit many passengers.

Travel time between Beijing and Wuhan has now fallen to 3 hours and 48 minutes, half an hour faster than before.

“The increased speed has expanded the transport capacity, creating more time slots for bullet trains to enter the capital,” Yin Dong, an official with the company’s transport department, told Beijing Television on Monday.

According to the group, the section’s transport capacity has increased by 7 percent after the increase of the speed, which allows it to operate as many as 15 additional bullet trains between Beijing and Wuhan every day, providing 18,000 more seats.

Since Monday, 14 more bullet trains will enter Beijing every day from cities including Chongqing, Xi’an in Shaanxi province, Shenzhen in Guangdong province and Guiyang in Guizhou province.

As the section links with many other railway lines, it cuts travel time between Beijing and many provincial capitals, such as Shijiazhuang in Hebei province, Zhengzhou in Henan province, Changsha in Hunan province, Nanchang in Jiangxi province and Chengdu in Sichuan province.

A total of 57 trains will operate at the accelerated speed.

The railway is also offering more services to improve passengers’ travel experience, such as quiet compartments and a more flexible ticket pricing. Quiet compartments are offered on 16 trains from Beijing to Zhengzhou, Wuhan and Chongqing.

The Beijing-Guangzhou High-speed Railway opened in 2012 and was designed to run at speeds of 300 km/h to 350 km/h.

Last month, a test run at the higher speed on the section was successful, showing the viability of increasing the line’s top speed from 310 km/h to 350 km/h.

With the speed up on the Beijing-Wuhan section and the opening of a new high-speed railway section in Chongqing and Hubei province, the travel time between Chongqing and Beijing has been trimmed by more than four hours.

A Chongqing resident surnamed Han was thrilled with the news. Her daughter’s family lives in Beijing and Han travels back and forth a lot.

“I like to travel by train. It is more relaxed and offers more space for people to stretch compared with air travel. But the previous bullet train trip between Beijing and Chongqing took more than 11 hours, which was too long for me,” the 67-year-old said, adding that she flew in the past, but she will take the train this summer to visit her grandson.

“I look forward to taking my grandson on the ride. He loves trains and talks about bullet trains all the time,” she said.

The travel time between Beijing and Chongqing has been cut to less than seven hours.