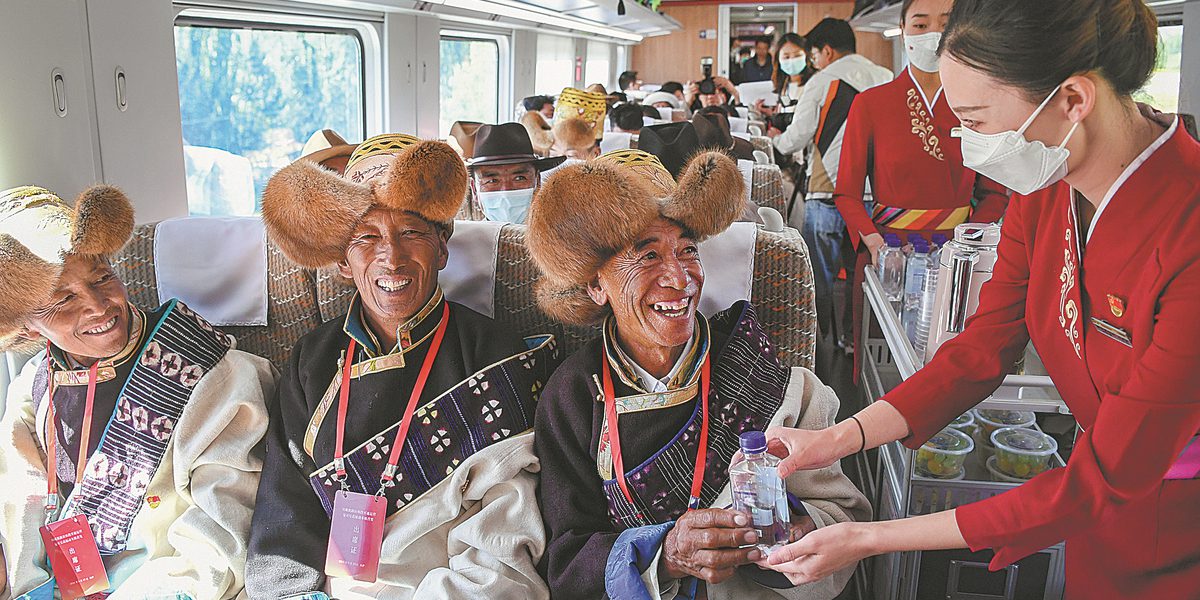 When Tashi Tsering, a farmer in the Tibet autonomous region, makes the long trip to visit one of his daughters, he now prefers going by train.

The journey by rail rather than road is not only cheaper, but is much more convenient and pleasant, too, said Tashi Tsering, who lives in the city of Lhokha, which first got rail service a year ago.

The enjoyable journey was made possible when the Lhasa-Nyingchi Railway began operating in June last year.

With a length of 435 kilometers and a design speed of 160 km/h, the Lhasa-Nyingchi Railway links Lhasa, the capital of the autonomous region, with the southeastern cities of Nyingchi and Lhokha.

“I have taken the train a few times now,” Tashi Tsering said. “Every time, I enjoy the feeling on the train, where broadcasts of safety reminders and instructions to passengers are in three languages－Tibetan, Mandarin and English. I can easily understand all the information in my own language－Tibetan.”

“The attendants are so nice, and the broadcast voice is so beautiful that every time I go, I don’t want to get off the train, even when I arrive at my destination,” the 66-year-old farmer added with a laugh.

The cost of a bus or van ticket for the trip from the part of Lhokha where Tashi Tsering lives to the town in Lhokha where his daughter resides is around 60 yuan ($9), while the fare for a regular seat on the train is only 11 yuan. The trip by train is also much quicker.

“It takes me about four hours to travel by a motor vehicle to Tsethang, the town where my daughter lives. By train, I can get there in 90 minutes,” Tashi Tsering said, adding that the train is safe and comfortable, too.

“I can have a cup of hot water or buy some snacks from the shop on the train at any time,” he said. “The attendants on the train are also very considerate. If a passenger does not feel well or needs a helping hand, they show up immediately.”

Trains operate between Lhasa and Nyingchi every day between 8 am and around 6 pm.

The Lhasa-Nyingchi rail line is an operational section of the Sichuan-Tibet Railway, which is still under construction. It brings single-line electrified rail service, which uses an overhead line to provide electricity to run the trains, to the plateau for the first time. As a result, Fuxing bullet trains, the fastest in China, now run throughout the nation.

The opening of the line not only ended the lack of access to rail service in southeastern Tibet, but also “further improved the entire Tibet autonomous region’s comprehensive transportation system”, Ma said.

“It has greatly contributed to the stability and accessibility of transportation in the region,” he added.

Since beginning operations a year ago, the Lhasa-Nyingchi Railway has transported about 1.14 million passengers and hauled 47,800 metric tons of cargo, according to China State Railway Group.

Sonam Wangdrak, who comes from Lhorong county in the city of Chamdo in Tibet and has been a locomotive driver for 15 years, is pleased to have the opportunity to work in Tibet.

He also hopes that access to rail service will continue to expand in Tibet.

Sonam Wangdrak recalled that, while in a primary school class three decades ago, he saw a picture of a train and made up his mind to work hard in school so he could one day be a locomotive engineer.

In 2003, he enrolled in Lanzhou Railway Machinery School in Northwest China’s Gansu province and studied there for four years.

In 2007, he began an internship with China Railway Qinghai-Tibet Group in Qinghai province, which neighbors Gansu, and became a qualified engineer in 2012.

Last year, Sonam Wangdrak received a license to drive Fuxing bullet trains in Tibet, and now he works on the Lhasa-Nyingchi rail line.

“When I was a boy, villagers in my hometown might not have had a chance to even see a train. Now I have become an engineer,” he said proudly.

“I believe that in a few years my hometown, Chamdo, in east Tibet will have rail access, and I dream that one day I will be able to go home by train,” he added.

Fu Xiaoge, 26, who is from Northeast China’s Liaoning province, began working as chief conductor for the Lhasa-Nyingchi rail in November.

“The opening of the rail is a historic event, and I want to make my own contribution to the development of Tibet while I am young,” Fu said.

Upon graduation from a vocational school in Central China’s Hunan province, she applied for a job on the Lhasa-Nyingchi rail line, having knowledge of Tibet that she learned from her father.

She knew about “the grand Potala Palace, Jokhang Temple, the snowcapped mountains and the yak herds”, Fu said.