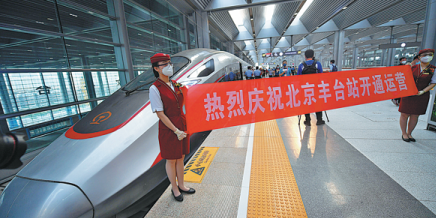 After four years of reconstruction, Beijing Fengtai Railway Station, the capital’s first railway station with a history dating back to 1885, reopened on June 20, marking a milestone in the city’s traffic network development.

The century-old train station covers some 400,000 square meters, about the size of 56 standard football fields, and is capable of accommodating as many as 14,000 travelers per hour in its departure area. It has 32 platforms to serve 32 lines, making it one of the largest railway transport hubs in Asia.

At Beijing Fengtai Railway Station, 120 passenger trains arrive and depart each day. It serves as the terminal for lines including the Beijing-Guangzhou High-Speed Railway and regular speed railways linking Beijing with Shanghai and Kowloon in the Hong Kong Special Administrative Region.

Located between the third and fourth ring roads in the southwest of the capital and between the Beijing West and Beijing South railway stations, Beijing Fengtai is designed to have bullet trains running on its upper level, ordinary trains at ground level and subways underground.

The designers of the station have paid attention to the concept of low-carbon operations. The lighting system is designed to use sunlight in the departure hall to save electricity. It could help to reduce carbon emission by 900 metric tons a year.

The station is equipped with a smart system to support services, operations and emergency response.

Travelers can arrive at the station by subway, bus, taxi, private car, bicycle or by walking.

It was estimated that more than 72 million passengers will travel to and from other parts of China through Beijing Fengtai Railway Station every year.

By combining the services of coaches, inner-city railways, suburban lines, buses and subways all under one roof, Beijing Fengtai Railway Station will be a key transportation hub in southern Beijing.

Some passengers will transfer from Beijing West and other Beijing stations, bringing more convenience to travelers and boosting regional social and economic development.

The reopening of Beijing Fengtai Railway Station also marked a milestone in the city’s construction of a national-level traffic network, including eight railway stations and two airports.

The eight stations will serve travelers across different areas of Beijing upon completion. Except Beijing Subcenter Station, the other seven have been put into use.