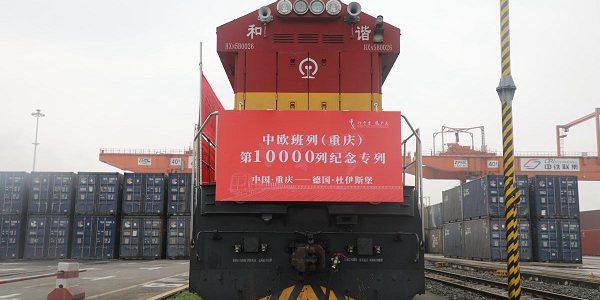 “I am proud to witness and carry out the mission. The China-Europe freight trains have given us a global reputation,” said the train’s engineer, Wei Xingfeng, who has worked the line for four years.

In March 2011, the first freight train loaded with electronics made in Chongqing marked the official opening of the Chongqing-Xinjiang-Europe express line.

The more than 11,000-kilometer link begins in Chongqing, crosses the border at Alashankou, Xinjiang Uygur autonomous region. It then passes through Kazakhstan, Russia, Belarus and Poland before reaching Duisburg.

Chongqing authorities say the railway puts the city on the map as an international logistics hub by connecting the Yangtze River Delta economic belt to Europe.

The journey takes an average of 16 days, less than half the time of the maritime route, and is changing Chongqing’s role from an inland city to a gateway city for a Chinese connection to the West.

“The Yuxinou International Railway has become a significant carrier and a brand for Chongqing to integrate into the Belt and Road Initiative — to build an inland international logistics hub and an open inland city in western China,” said Ba Chuanjiang, director of the Chongqing Port and Logistics Office.